Manhattan College was founded by the De La Salle Christian Brothers in 1853. The College moved from Manhattan to the Riverdale/Kingsbridge area of the Bronx in 1923.  In the 1960s, after the Vatican II document “Nostra Aetate,” the New York Diocese and the Anti Defamation League planned to work together to improve Catholic-Jewish relations. The Archbishop requested that Manhattan College prepare for him a 60 page summary about Judaism. A young history professor, Frederick M. Schweitzer, was assigned the task. The 60 pages became a 300 page book, and a professor found his life’s work. Dr. Schweitzer’s study of Judaism, Anti-Semitism, and the Holocaust led to 4 books, numerous articles and lectures, and in 1996 the founding of the Manhattan College Holocaust Resource Center.   The Manhattan College Holocaust Resource Center grew out of discussions between concerned faculty and administrators at the College led by Rose Santos-Cunningham, Brother Peter Drake, F. S. C., and Frederick Schweitzer and members of the Riverdale community, most notably Martin Spett, Lou Falkenstein, and the late Martin Richman during the 1995-1996 academic year. The Center's Charter was approved by the President of the College, Brother Thomas Scanlan, F. S. C. in 1996.

Dr. Schweitzer, the first Director of the Holocaust Resource Center, engaged in outreach to the Jewish community, scheduled lectures by Holocaust scholars, and conducted workshops for area teachers.  He was later assisted by Dr. Jeff, a history professor, who became Director in 2007 after Dr. Schweitzer retired and became Director Emeritus.  Dr. Horn was assisted by two Assistant Directors, Barbara Reynolds, a retired teacher from Fordham Prep, and Martha Frazer, a former interviewer for Stephen Spielberg's Survivors of the Shoah Visual Project.

Dr. Jeff Horn continued the Center's lecture series, brining in world renowned scholars such as Samantha Powers, and Christopher Browning  He also created a DVD project in which Manhattan College students, trained by him and by Ms. Frazer, interviewed Holocaust survivors, and then edited the tapes for viewing by high school and middle school students.  These DVDs were distributed all over the country.  Ms. Reynolds acted as a teacher liaison. She continued workshops to introduce teachers to methods, such as the use of oral history or the use of picture books, for bringing state mandated Holocaust education into local classrooms, and she also arranged exhibits of Holocaust art.  Ms. Frazer acted as a liaison to the local community.  She also created the Second Generation Project at the Center.

Dr. Mehnaz M. Afridi, assistant professor of Religious Studies, was appointed Director of the Center in 2011.  As a Muslim woman she specializes in Islam and the Holocaust.  The Center, its mission expanded, is now known as the Holocaust, Genocide and Interfaith Education Center.  In addition to events for the campus community, the Center schedules two to three lectures a year, one on the Holocaust, one on Genocide and an interfaith one.  Its community outreach includes a speakers bureau, led since 1996 by Martin Spett, and interfaith activities in which College students, local community and New York City members work together.

In Afghanistan, Sohaila Kakar was a practicing surgeon; then, in 2021, the Taliban took over the country. Join us as Sohaila discusses life before and after the Taliban's takeover in Afghanistan–and the physical, economic, and psychological toll it had upon her family as they fled. Her story also highlights the compassionate work done by Upwardly Global, the non-profit agency that provided guidance to Sohaila’s family as they settled in the U.S. 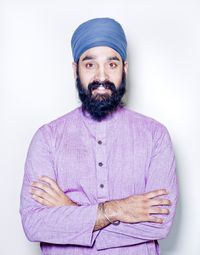 Turbans and Beards, Happiness and Justice: Tapping Sikh Wisdom to Meet Our Challenges

Featured speaker: Dr. Simran Jeet Singh Dr. Simran Jeet Singh Executive Director of the Aspen Institute for Religion & Society on “The Light We Give, “ a book on the wisdom of Sikhism about overcoming racism and fear through optimism and connection. Simran is a public figure in interreligious engagement and a scholar. As turban-wearing Sikhs growing up in Texas, Simran and his brothers faced racism daily. On the soccer field, on the basketball court, and especially at the airport. Over the years, Simran learned that the same tradition that caused him to look different had unique wisdom for confronting the challenges of our time. Simran has studied and practiced these teachings and shares insights on how Sikh ideas can enrich us all.

80-year anniversary of the Warsaw Ghetto

Dr. Zachary Mazur, Senior Historian at the Polin Museum of Jews in Warsaw, Poland. It is the 80-year anniversary of the Warsaw Ghetto in April. “The Ghetto in Warsaw and the Uprising: Marking 80 years.